Clap Your Hands & Stomp Your Feet…

It is a ritual of the summer…

In every small town in Western New York. The scene is a typical Main Street, lined on both sides with a breathless throng, piled five or six deep, children riding on their fathers’ shoulders, their eyes all trained on the corner, waiting, murmuring excitedly, anticipating.

It starts with a rhythmic, pulsing roll, a sound like distant thunder, getting closer and closer. Then, the rumble is joined by a reedy skirling that makes the blood sing and the hairs stand up on the necks of the throng.

Then, with a flash of Royal Stuart Red and Black Watch green, the head of the parade rounds the turn, and a wild roar goes up from the crowd… 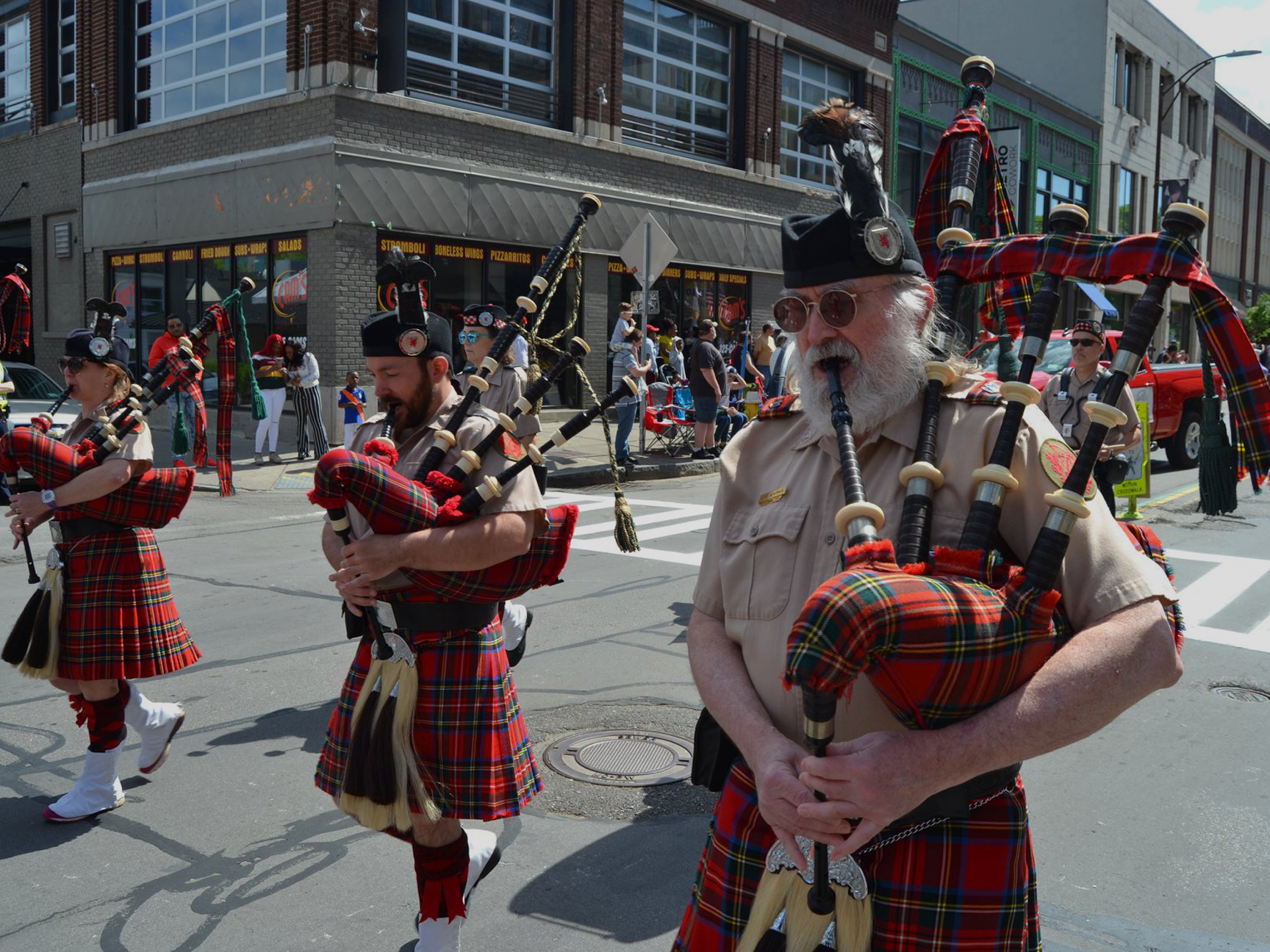 In 1919, John White Johnston, a musical composer, author, publisher, lecturer, inventor, and manufacturer, returned home to Rochester from his service with the New York Scottish Infantry Regiment. He founded the John White Johnston Memorial Pipe Band as a tribute to his father. On Memorial Day, 1919, the skirl of the bagpipes was heard in Rochester to honor those men at war. Every Memorial Day since, the Pipes and Drums have been heard to immortalize that beginning.

There have been many name changes since that first Memorial Day: the Clan McNaughton Pipe Band, the Genesee Pipe Band, and the City of Rochester Pipe Band. The band’s uniform (the Royal Stewart for the pipers, Black Watch for the drummers) is modeled after the 42nd Regiment of Foot (Royal Highlanders), Scotland’s famous Black Watch, by special permission of Her Majesty, Queen Elizabeth II. But the mission has remained the same: to play the traditional Scottish and Celtic Music, and to honor the heroes of our many conflicts.

Consistent through these changes is the Rochester tradition of honoring our veterans and a dedication to all things Celtic. It lives on today in the Rochester Scottish Pipes and Drums. The pipes, together with the award winning “Highland Thunder” Drum Corps (a force in their own right) honor our past and present.

The year begins with a celebration Scotland’s favorite son, poet Robert Burns. Then there are the parades.

There is hardly a firemen’s parade in the Rochester area that has not featured the band. In 2002, the band took part in the Tunes of Glory parade in New York City. In 2006 and again in 2008, the band marched in the famous Boston St. Patrick’s Day Parade and has piped in the Allied Forces three times at the Warriors Day Parade, part of the Canadian National Exhibition in Toronto.
There are also many concerts, tattoos and closing ceremonies where the band has performed, including the Rochester International LPGA golf tournament, the three Rochester International Marine Tattoos, plus the Hamilton Military Tattoo in Ontario, the Genesee Country Museum’s Highland Gathering and the Museum’s new Celtic Festival, the Niagara Celtic Festival at Olcott, New York and the Sodus Lighthouse concert. They have opened for the Dropkick Murphys. In April 2014, the band was invited to participate in the West Point Military Academy’s Tattoo and has performed there every year since. On a cold day in each December the band pipes for the It’s a Wonderful Life Run in Seneca Falls.
Practicing at the East Rochester School Complex, the band prepares to thrill new audiences. Truly the Rochester Scottish Pipes and Drums are Rochester’s Celtic Ambassador to the world. That tradition, 100 years and counting will carry on into to the future.

As a local Minister recently said of the band: “Like the Word of God, the Pipes cannot be ignored” 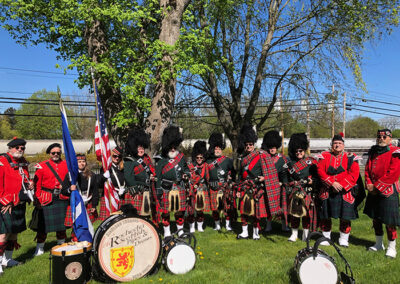 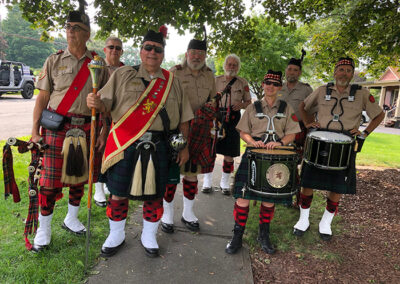 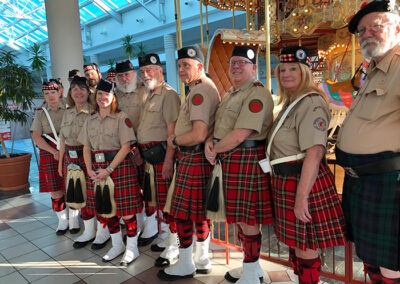 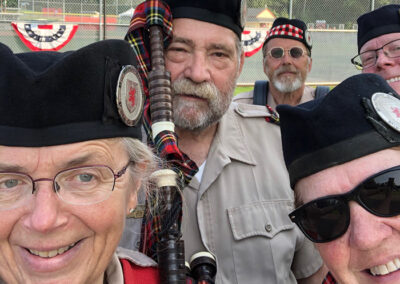 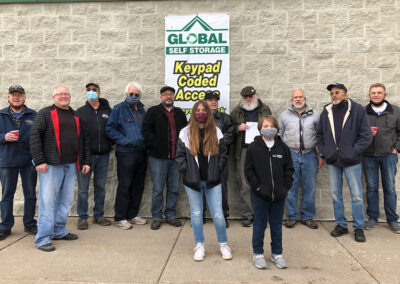 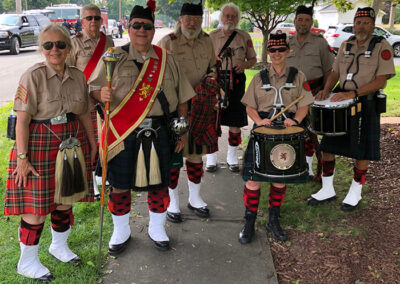 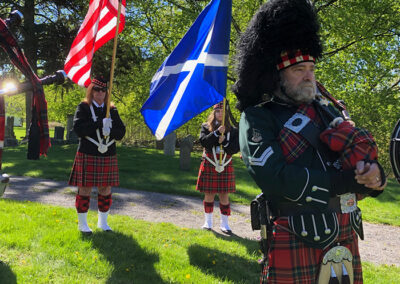 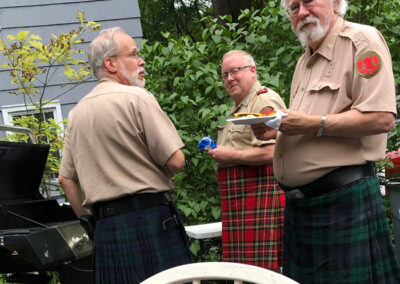 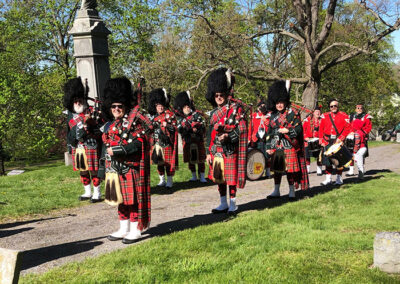 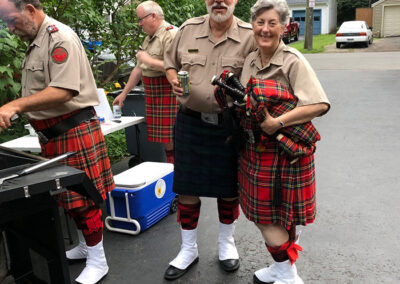 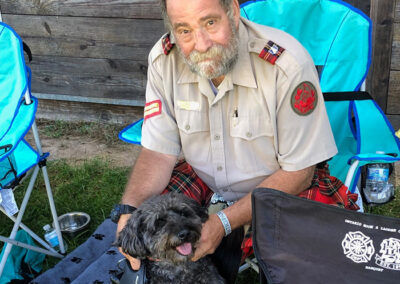 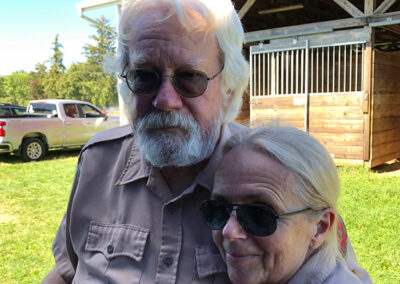 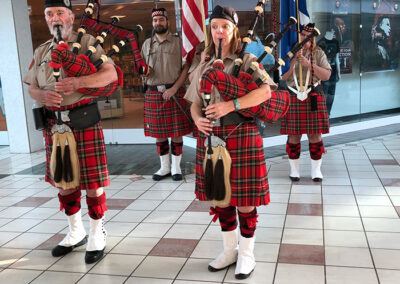 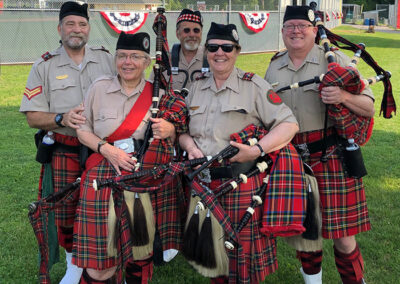 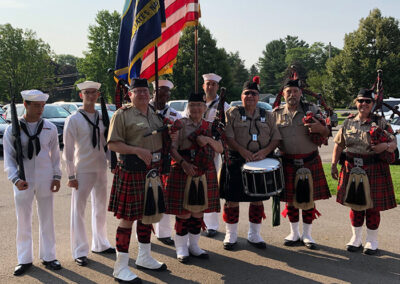 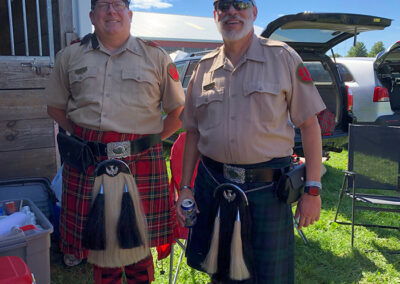 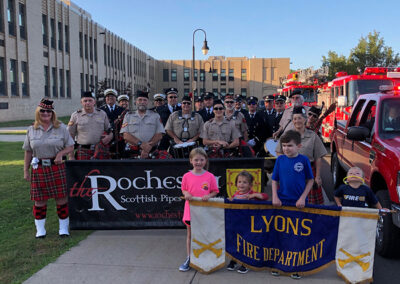 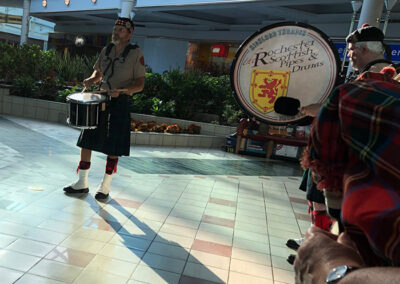 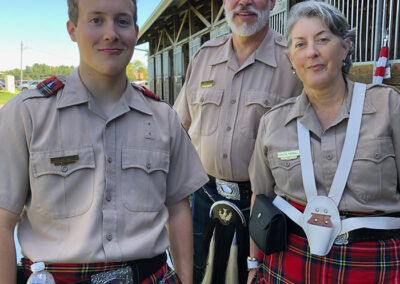 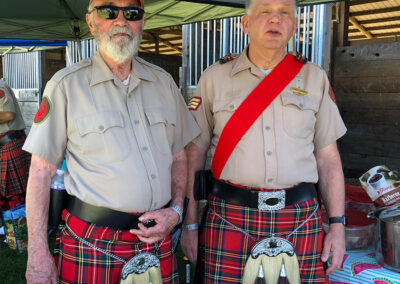